Erica LouiseMay 14, 2018Stories0 comments
Langkawi offers you a lot, a lot and a lot of experiences to take back home while you are exploring this pretty island. When I was in Langkawi, I had no idea of what should I do but still, I did a lot. I explained every bit of my experiences in the previous blog, Langkawi, the Eagle Island. One thing I would love to expound on is my Island hopping Jet Ski Tour.

Riding a jet ski looked really fun, but well! It scared me initially. Michael seemed more excited to take up that ride. While I was waiting at the Cenang beach, Michael went for the 20 minutes riding session of the jet ski. Even he tried it for the first time, and I must say he was amazing at it. When I got confident more than he got confident of himself we started off the tour. He was riding, and I was sitting at the back. We moved the first 10 meters, and my heart started beating faster. It was not because I was scared, but it was out of excitement, my excitement level grew with every water wave we would ride on. As the wind started blowing the waves began speeding up, I got goosebumps. “This is something I was dying to do,” I said to myself. We were nine people in total with six jet skis, all unknown to me except Michael. We had to travel together as a group.

Riding through various islands, we reached our first stop point, the white sand beach. OH! The sand was really white. The water was clear and blue. People were taking up the most famous water activity there, snorkeling… But I was quite busy exploring the nearby forest and chilling in the water. Something is really exciting with Michael and me that we try to swim in all kinds of water and yeah! You guessed it right; we tried swimming in the white sand beach as well. There was a long wooden bridge on the beach from where we were able to feed thousands of fishes swimming together in a group. That was the first time I saw fishes as a pet and not as food.

Accelerating our jet skis, all of us started moving towards to the point where the main superheroes of Langkawi reside. The superheroes, the Eagles after whom the island has been named fly over the island in search of some meat. We didn’t dare to, but our jet ski tour guide threw some meat in the water, and the Eagles quickly grabbed it by diving into the sea, wow! That was quick and yeah! Unusual to see.

What’s that? Is there a pregnant maiden inside the island? Or there are many pregnant maidens inside?    “Let’s stop here,” the guide said. We were a bit confused. “Look up there, do you see that island?” “We are going there,” the guide said. We then gave a close look at the island he pointed his finger at. Whoa! The island was in the shape of a laid pregnant woman, and that’s how it’s known as the Pregnant Maiden Island. That amazed me. He also told us about a freshwater lake inside that island where we can swim but without taking off our life jackets. I got to know the reason behind that when I was in the lake. The water was too hard to swim, and you cannot get in without the life jacket otherwise you might drown. My first step into the water and oops! It was too deep as well, and anyway it was harder to swim wearing the jacket. What I could do was... just go with the flow. 😛 What kept me amazed was the freshness of water, just keep yourself loose and keep flowing. That’s what I did. 😀

A Shack That’s Really a Shack

It was time to move forward, and we went for lunch. “God! Are we going there?”, I asked Michael when I saw a shack in the middle of the sea. Just calm and quiet dining place. As soon as I got off my jet ski, I was so excited to see that entire place. It was a small hut with a huge open area and underwater tanks where they catch and store fishes, crabs, prawns and other creatures. Well! It was a pleasure meeting them. I was glad I am not going to eat them because my food was already cooked. 😛 The owners of that shack prepared a beautiful food table and all I could see was fishes, prawns, and chicken with some fruits. Let me not skip saying this, “it was the most amazing shack food I have ever had.”
Speeding up and taking a close look at more islands we then came back to the start point and yeah! Unfortunately, it was the end of the tour. We thought of chilling for some time at the Cenang beach, and later we went for some more fresh water, the seven well waterfall. That’s the whole story of my Jet Ski Island hopping tour. Please! Just go for it. 😀

KNOW MORE ABOUT MY EXPERIENCE AT LANGKAWI, THE EAGLE ISLAND.

Hi from World through Erica, a budget traveler, helping her loved ones to make their own cheerful stories. Let's travel together at worldthrougherica.com
Related Articles
My 12 Hours in Southend-on-Sea
Exploring Agra on a Bicycle
Pondicherry, a Little France in India 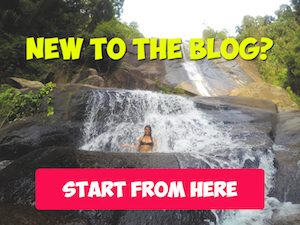